Many of these questions are asked on the Facebook page.  If we get the same question several times on the FB page, we like to add it here.  If you have a question that is not answered here.  Please fee free to contact us.

Should we avoid diuretics which could lead to damage to the kidneys?

Are we OK to eat tomatoes? I understand they are quite acidic.

Dr David Goldfarb answers:
Tomatoes are OK. Fruits and vegetables lead to urinary alkalinization. Yes there is citric acid in tomatoes, which has NO NET EFFECT on urinary pH. The citrate part of citric acid is a base, and neutralizes the effect of the acid. That’s why there is no problem with Bicitra, as one example, containing citric acid even if the preparation is used for urinary alkalization. Who could give up tomatoes?

Is there a decreased life span?

Dr Lisa Ruml answers:
If a patient with cystinuria is able to prevent stones, or at least produce and pass stones without resulting in blockage of the urinary tract, there should be no cause for reduced life span. Many patients never develop renal insufficiency (poorly functioning kidneys), particularly if they are compliant with their fluid regimen. If kidney damage does not occur, and in the absence of other complicating medical problems, then life expectancy is the same as in someone without cystinuria. If the kidneys become chronically blocked, function may worsen; if they become chronically infected, they sometimes have to be removed. If patients do end up on dialysis or receive a transplant, then they may have complications of those procedures and perhaps not do well. Like any patient on dialysis or with a transplant, serious and sometimes fatal complications are more likely than in an otherwise healthy person.

Will a kidney transplant solve the problem?

Dr Lisa Ruml answers:
Yes, if a cystinuric patient receives a kidney from a non-cystinuric donor, that kidney will function normally and will be able to reabsorb cystine from the urine. Unfortunately, a renal transplant is a major procedure with long-term consequences from the medications required to prevent rejection. It is, however, the only option in some instances, but the need for this drastic measure is not common.

Can I remove the stent by myself?

This is best answered by your doctor.  Don’t remove your stent without discussing this with your doctor.

Do I need to be vegan/vegetarian to reduce the stones?

No.  But… Eating less meat and more fruit and vegetables is likely to help reduce stone formation.  Reducing the intake of meat, fish and cheese is thought to be beneficial, as it reduces the amount of cystine the kidneys have to handle. A plant based diet can also help alkaline the urine, which makes cystine more soluble and less likely to form stones.

Dr David Goldfarb answer:
Protein ingestion leads to more urinary acid to excrete. Fruits and vegetables lead to alkalization. This may be a more important reason to restrict protein intake than limiting methionine intake. I agree that the benefit of diet in the long run is not well studied, in children or adults and that protein intake could be overcome by more water drinking and effective alkalization. But I’ve noted that some of you out there claim to have benefited from a more vegetarian diet and I would bet that the effect on urine pH is more important than the effect on cystine excretion.

How did I get Cystinuria?

Cystinuria is an inherited condition (i.e. you were born with it). People with cystinuria usually inherit from parents who don’t have it. The way that it is inherited is through an autosomal recessive pattern – this means that you would need to have two of the cystinuira genes (one from each parent) to be affected by it. That is why usually your parents did not have the disease as they were only carriers. In the diagram below the ‘A’ represents a normal gene and ‘a’ represents a cystinuric gene. As one parent gives one gene each to their child, there is a 1 in 4 chance of receiving both ‘a’ genes.
This pattern of inheritance also explains why your brother or sister has a 1 in 4 chance of of having the disease, and a 1 in 2 chance of being a carrier. 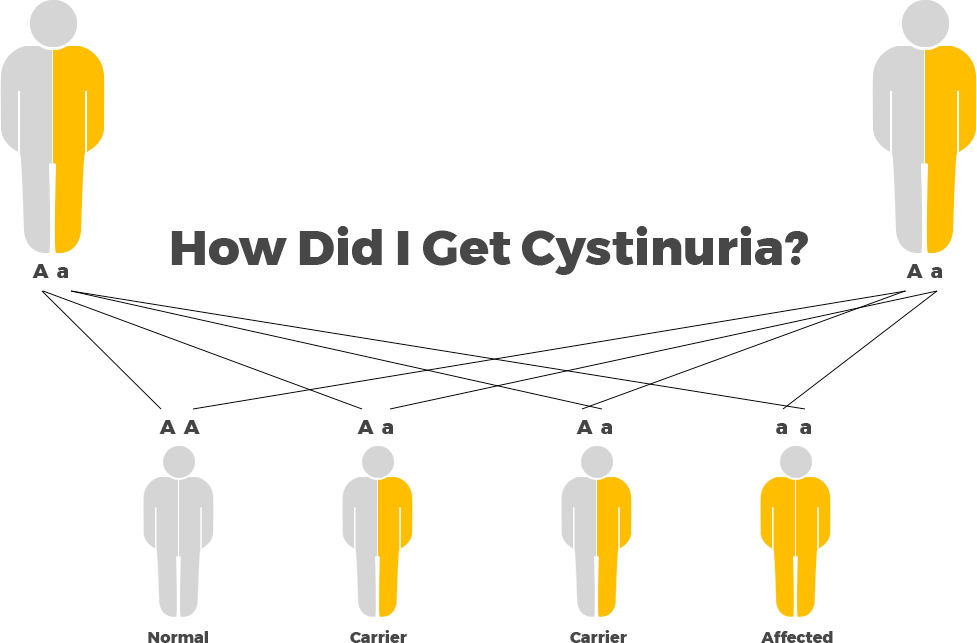 If you have cystinuria then it is a good idea if your brothers and sisters are also tested, especially if they have ever had a stone.