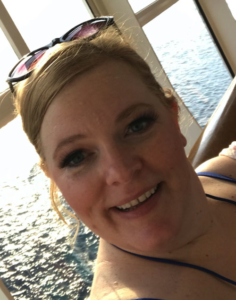 Leslie Whitney has Cystinuria, a chronic disease characterized by the formation of kidney stones. She keeps pill holders in her car and her cellphone is loaded with apps that remind her to take her medications every day. It’s all part of many arrangements she has had to make to manage her condition. She also drinks over 5 quarts of water a day to help with the treatment.

An inherited condition, Cystinuria causes stones made of the amino acid cystine to form in the kidneys. There is no cure for the disease. However, patients can help stop the formation of cystine stones by drinking plenty of liquids, reducing the amount of sodium in their diet and limiting alcohol consumption. Maintaining a healthy diet may reduce the chance of developing future cystine stones. These lifestyle changes can be challenging for both patients and their families. But for Leslie, 42, a divorced mother of 3 with a full-time job near Kansas City, this is not as difficult as the long and painful path she had to follow before being diagnosed with the disease.

“Getting diagnosed was really hard,” said Leslie, who saw a number of urologists and even lost her right kidney before being diagnosed with Cystinuria.

Leslie passed stones after giving birth to each of her three children, and after the last baby she was in excruciating pain. At the time, the family didn’t have adequate coverage and a visit to the emergency room was too costly. Yet she couldn’t afford not to seek immediate care. At the hospital, the imaging showed her right kidney was full of stones, and doctors also had to use stents to clear a blockage in her left kidney. A year later, Leslie was in pain again, and the x-rays showed the same-size stones in the same place in her left kidney.

During this time, Leslie was overwhelmed by medical bills she couldn’t afford to pay. It was not until she got coverage that she was able to receive the ongoing care she needed. She had her right kidney removed and just two weeks later, she felt better than ever. “All of a sudden, I felt healthy, ‘do people feel like this’?”, she wondered. “I didn’t realize how sick I was”. The diagnosis came a few months later, after she underwent emergency surgery, and doctors analyzed the texture of the stone in the lab. It was Cystinuria. Unlike other types of kidney stones, cystine stones are often larger, harder and more frequent. Due to the larger stone size, cystine stones are often more difficult to pass, and many times the removal requires surgical or urological procedures.

Like most patients diagnosed with the disease, Leslie hadn’t heard about Cystinuria but soon learned how to control the disease without surgery. Since the diagnosis, she has had a good team of doctors, including a primary care physician, a nephrologist and a urologist, who provide her with comprehensive and coordinated care. She says she could have gotten to this point much sooner if she had had health insurance. “I should and could have been diagnosed much earlier.”

To raise awareness about Cystinuria and emphasize the importance of early diagnosis, Leslie made a request to Governor Laura Kelly, who issued a Proclamation declaring June 24, 2022, as Cystinuria Awareness Day in the state of Kansas.