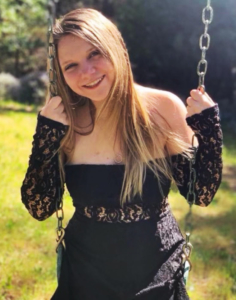 Sierra Gibbs is a sophomore at California State University, Long Beach. Her life may seem like everybody else’s around her, but her story is not.  At 13, while growing up in Colfax, CA, she was diagnosed with Cystinuria, an incurable, rare and debilitating disease she knew nothing about.  “It’s hard to look at your life and see you will never be like everyone else the rest of your life”, said Sierra, now 20.

Sierra is right. Her life is not like other people’s lives, and neither are the challenges she faces living with Cystinuria. This semester, she had to take a catastrophic leave from school while undergoing two new surgeries for kidney stones removal.  However, the difficulties of managing her medical condition have also made Sierra stronger. Her dream is to become a physician’s assistant with her own practice, and she will be back in school in the fall.

Cystinuria affects 1 in 10,000 people and there are 42 known cases in California. Lifelong, frequent and recurrent kidney stone formation due to Cystinuria can lead to chronic kidney disease, which, if not managed properly, can worsen and become kidney failure requiring dialysis or a kidney transplant. This makes early diagnosis and treatment important.

Sierra started having symptoms of Cystinuria when she was 10, but it took three years to get the right diagnosis after an exploratory surgery to finally understand why she was in so much pain and getting sick all the time.  “It was frustrating,” remembers Sierra. “The hardest thing is that nobody really knows much about Cystinuria, not even my doctors.”

Cystinuria Awareness Day is held every year on June 24.  This year, Sierra’s mother, Michelle Gibbs, worked with her representative, State Senator Brian Dahle, who introduced SCR 30, a resolution to recognize June 24, 2021, as Cystinuria Awareness Day in California to promote awareness of Cystinuria and show support for California medical research centers that take an active role in the fight against the disease.

“I’m truly fighting not for a symbolic, special day, but for my daughter not to lose hope,” said Michelle Gibbs while working with State Senator Dahle’s office. “As a young adult, Sierra has big goals and dreams, even with all she’s dealing with and going through. I want a better, pain free future for her, a future where she isn’t living in a constant state of anxiety, pain, and unpredictability from a rare disease few people know about or understand.”

The resolution can increase Cystinuria awareness and research. “It’s a step forward in the right direction”, Michelle said. “I want a cure for Cystinuria”.