Skip to content
You can’t be a pilot and a Cystinuric ;(

You can’t be a pilot and a Cystinuric ;( 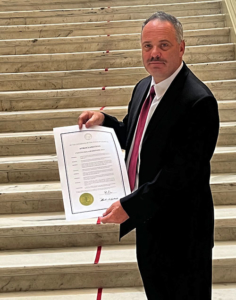 Alvin Landrum lives in Carrollton, a small town nearly 40 miles west of Atlanta, Georgia. At 55, he sees a handful of physicians and specialists on a regularly basis, from primary care doctors to nephrologists to urologists, and takes 22 pills every day. Alvin is living with Cystinuria, a lifelong condition that can be controlled but not cured. It is a rare, inherited disease and runs in Alvin’s family. The oldest of his three sons, Nicholas, now 30, was diagnosed with the disease and has experienced serious complications.

In people with Cystinuria, stones – hard deposits made of minerals and salts – form inside the kidneys. Passing kidney stones can be quite painful. Some people need nothing more than to take a medication and drink a lot of water to pass a kidney stone, while others may need surgery. Since he was diagnosed at the age of 11, Alvin has passed 200 stones and undergone 10 surgeries. He remembers one time when he passed the largest stones he has ever passed, which kept him in the hospital for three days. “I made a necklace with them”, he said.

While he says not much was known about the disease in the 70s, he eventually connected with the right doctors and is now receiving coordinated care from a multidisciplinary medical team. At the beginning, he said, it was a geneticist who helped him the most. To others being diagnosed with Cystinuria, Alvin says it is important to find the right urologist, one that has been exposed to and treated patients with Cystinuria before.

Alvin wanted to join the US Navy and become a pilot, a dream he couldn’t pursue because of the disease. However, he says you can’t let Cystinuria define you or stop you from moving forward. With the support of his mother while growing up, Alvin had an active life, played football and baseball and after graduating from high school went to college and followed in his father’s footsteps to become an aircraft mechanic. “I love the work I do, and I have done things not many get to do, like working on military helicopters and aircraft that’s been used in combat for nine years”, he said. “My work makes a difference”.

To Alvin, the key to living with Cystinuria and controlling the disease is a strong support system. He says he was very lucky to have had support from the very beginning, from his mother making sure he took all his medications, to his wife sitting by him in a hospital bed to friends cutting the grass or feeding your animals if that’s what was needed. “This is very important’, said Alvin.

About the treatment of Cystinuria, Alvin says he would like to see advances in the development of new medicines. There are not enough medicines, he said. “There is a small percentage of people with Cystinuria, and research is very costly”. By requesting the Governor to declare June 24 Cystinuria Awareness Day in Georgia, Alvin hopes he can contribute in some way to shed light on the disease and promote research for a cure or better treatments.